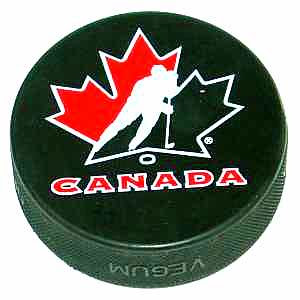 The nominations for the RTCCAs (popularly pronounced Artsies or Ratcocs, depending on the sassiness of the one doing the pronouncing) were posted on Dave's Theater Blog late Monday evening. Many also refer to the actual awards as "hockey pucks," because of the circular design of the handsome acrylic trophies that are handed out. Meaning no disrespect, I've chosen a Canadian hockey puck to illustrate this article because: A - I couldn't find a photo on line of an actual Artsy, and B - well, I'll let you speculate about B.

Because I swim in the technological backwaters, I knew nothing about the announced nominations until Tuesday morning when I read a nice message that Jacquie O'Connor wrote on my Facebook wall. Our Managing Director, Phil Whiteway, received some sort of message on his blackberry, or whatever phone thing he has, on Monday night. From all reports, the phone of our Associate Artistic Director, Chase Kniffen, began ringing furiously shortly after Dave's initial posting.

I'm so out of the loop that it sometimes startles me.

Anyway, what a nice surprise to discover that Barksdale and Theatre IV are parties to 48 nominations--49 if you count our connections to Neil and SaraBelle November. I greatly appreciate all this recognition.

I really really really don't envy the Richmond theatre critics and the challenges they face in trying to come up with this list of nominees. I think it's great that they're giving kudos to theatres and theatre artists in Richmond. As an economic sector, we need all the attention we can get. But their job is next to impossible. With so many worthy performances, how can anyone possibly choose one set of theatre artists over another. All I can say is, I'm glad I don't have to do it.

My job is an easier one. I get to Monday morning (Wednesday night?) quarterback and make some additional "nominations" of performances that I admired, performances that didn't make it on to the final roster selected by the critics. My "nominations" represent nothing more than one humble opinion--which ain't worth squat. Like the critics, I'm sure I too will leave out people I really liked and am now forgetting, but since these nods of mine carry no weight whatsoever, I hope everyone will put up with my whimsy.

I also get to toss out some comments that have little to do with anything, but interest me nonetheless. It's a blog. So sue me. 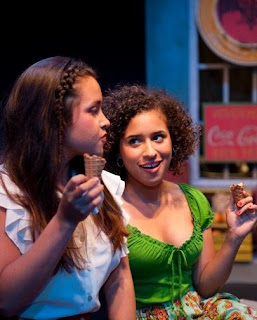 First off, I loved everyone in the acting and design teams of the three shows I had the privilege to direct this season: Boleros for the Disenchanted (the wonderful and nominated Carmen Zilles is pictured to the left, next to the wonderful and not nominated Michelle Guadalupe), First Baptist of Ivy Gap, and On Golden Pond. Since I'm completely biased in their favor, I won't single out any one of them individually for recognition here. Except one. I know Joe Inscoe is nominated several times for other performances, but not to nominate him for On Golden Pond?? I thought he was exceptional. I'm just sayin'.

I'm a little surprised (but delighted) to see that Souvenir is considered to be a musical. At the end of the day, I don't care if the critics call it a musical, a non-musical, or an egg salad sandwich--I'm really glad that the excellent work that went into this show was recognized.

I already wrote to Jase Smith individually, and told him I thought his direction of Rent represented his best work thus far and deserved a nomination. I also think that Terence Sullivan was terrific in Rent. In my opinion, he was the major new "discovery" of the year. I thought Durron Tyre was incredible in Rent and deservedly nominated, but I don't think the character of Tom Collins is a lead. In my little world, Durron should be up for Best Supporting Actor in a Musical.

In like manner, I was surprised to see that Ford Flannagan's wonderful performance in Putnam County Spelling Bee was nominated in the Leading Actor category, while Debra Wagoner's performance in the same show in a role that was actually larger than Ford's was recognized in the Supporting Actor category. It seems like both of them were outstanding supporting actors to me. 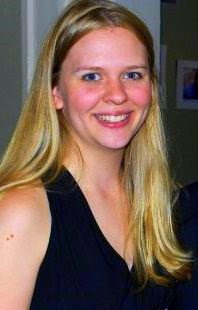 And speaking of directors--I was, a couple paragraphs back--I thought Molly Hood (pictured to the left) did a terrific job with Twelfth Night. Here again, I applaud each of Barksdale's and Theatre IV's directors, but I'm biased so I won't single them out.

I enjoyed noting that The Sound of Music was abbreviated SOM and Servant of Two Masters was abbreviated SOTM. It reminded me of the previous season when Barksdale did Children of a Lesser God and Stage 1 did Children's Letters to God almost simultaneously. Good times. It made me try to think of other plays we might have produced last season with titles that could be abbreviated with some variation of SOM. But I came up with bupkis. It's late at night.

I think the strongest category may be Best Supporting Actor in a Play. All five nominees are equally deserving. And I can think of more than a few others who turned in equally impressive performances in this category--too many to single out. I'm excited that there's a new category for original work--something lacking in the past.

Maybe next year the critics can consider recognizing a break-through performance by someone previously unnoticed, or maybe a "Most Outstanding Debut" category. I thought Laurel Maughan, who is new to our ranks, contributed greatly to Twelfth Night. In the veteran category, I though Jackie Jones was particularly noteworthy playing Golda Meir in her one woman show at the JCC. Somewhere in between, Joe Carlson impressed, I thought, in Grapes of Wrath, carrying a difficult show on his emerging shoulders. Joe will contribute greatly to Richmond theatre's future, should we be lucky enough to hang on to him.

I'm so pleased that Hanover Tavern received some recognition this year; the Tavern was completely shut out in years one and two. I know there will always be those who feel under-appreciated, just like all of us at Hanover Tavern felt in 2008 and 2009. But I think the critics do an outstanding job trying to recognize good work everywhere, and trying to maintain a balance.

Last but not least, I'd like to tip my hat to the kids in The Sound of Music--maybe in the best ensemble category. They were amazingly talented, professional and accomplished throughout a lengthy run, and were at the very heart of Central Virginia's most popular show of the past season.

So, those are a few random thoughts, signifying nothing. Again, I think the critics are doing a great job and I don't envy them. There's no way they could satisfy everyone. So I salute them, and thank them for their service.

I think Joe is the Meryl Streep of Richmond...he could win every year, but sometimes they let other people win just to be nice! :) In all seriousness - I was just as shocked as you not to see his name for Golden Pond, especially after having the honor of watching his process for Shining City. Both roles were so completely different…and I sat there in awe of his ability as an actor to transform so completely from one play and role to another. Such a rare gift…which is why there is only one Meryl and only one Joe!

Sorry to rain on a nice parade--I really enjoyed it--but the most popular show of the last season in Richmond was undoubtedly 'Wicked,' grossing over $3 million in three weeks... or $4 million. Anyone recall?

We can assume "locally produced" when Bruce says most popular, and revel in how delightful 'SOTM' was.

They will not win any Artsies, but behold: the Broadway behemoth returns. -J

Anonymous J is right on two counts. A - The roadshow of Wicked sold more tickets than any other play or musical presented in Richmond last season, and B - you can assume "locally produced" when I said "most popular." Honestly, "Wicked" never even crossed my mind when writing about the Richmond Critics Circle Awards. I'm not sure Anonymous J is correct in his/her statement "Behold, the Broadway behemoth returns." I know the roadshow season at CenterStage claims the name "Broadway," but so do the major musicals at the Empire. I'll be writing more about this shortly.

Thanks, Bruce! What a nice surprise! A girl does like to feel appreciated...

Well, there was The Song of Mulan, which was abbreviated TSOM... just to add to the SOTM and SOM mix.

Hann, you are my new hero. Keep 'em comin'. Many thanks.

Funny you should mention SOM & SOTM. I keep going in to open our photos of Smoke on the Mt for the website, and I made the mistake of saving a few from last time as SOM, so they're mixed in with the Sound of Music photos. At least I saved the other SOM (Song of Mulan) that Hann mentioned in the TIV folder.

So to recap: SOM = Sound of Music, SOTM = Servant of Two Masters and/or Smoke on the Mountain, TSOM = The Song of Mulan. Any other recent Richmond shows to add to the alphabet soup?