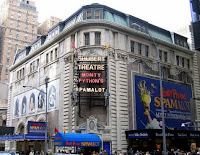 One fascinating aspect of our meetings with the Shubert Foundation is that we sometimes meet with Amy Dorfman in the elegant living room of J. J. Shubert’s legendary penthouse, located high above Sardi's restaurant and directly across 44th Street from the Shubert Theatre and Shubert Alley. Amy’s offices are located a floor or two below the penthouse, but grant recipients occasionally get to talk about their theatres with Amy while surrounded by some of the elegance created and enjoyed by the brothers Shubert in their glory days.

J. J. Shubert was the youngest of the three Shubert brothers, all of whom were born in Poland and emigrated as children to the United States, ultimately settling with other Polish families in Syracuse, N. Y. While still in their 20s, the three Shubert brothers managed to pool their meager salaries and somehow gain control over several theatres upstate. They ultimately moved their growing theatrical producing and real estate business to New York City. The middle brother, Sam Shubert, died in a tragic train wreck in 1915, leaving older brother Lee Shubert and younger brother J. J. Shubert to manage and grow the thriving Shubert empire. 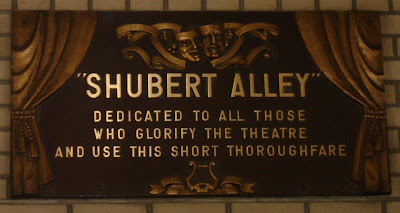 “At the beginning of 1925, J. J. was at the peak of his success. Although J. J.’s operettas and revues brought in substantial amounts of money, for which Lee of course was grateful, Lee also resented and envied his younger brother’s track record. Despite a public charade that all was well between them—a charade Lee had been orchestrating since they had moved into their offices above the Shubert Theatre in 1913—their mutual animosity had continued to fester. In the summer of 1925, while J. J. was on one of his regular shopping expeditions in Europe, Lee moved his brother’s office across the street into a new Shubert building at 234 W. 44th Street (pictured below and to the right). This sudden and aggressive act was clearly a signal to J. J. that, despite his success as a musical impresario, Lee was still the firm’s CEO. 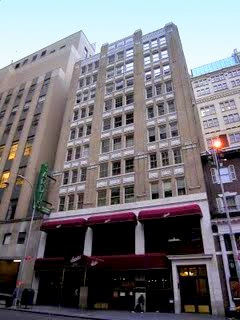 When he returned, J. J. at first was enraged, but then he realized that Lee had in fact given him the opportunity to create a duchy of his own. J. J. bullied the architect of the new building—John (J. J.’s son) claimed that J. J. physically threatened the man—into adding six more stories into his design so that the building would be higher than the Shubert Theatre. He had the architect build a penthouse, which included a living room almost the entire width of the building, a dining room with a stained glass skylight, a library, a master bedroom, dressing rooms, two baths, a kitchen, servants’ quarters, and a terrace facing 44th Street.

When the architect protested that there would hardly be enough room for a terrace, J. J. persisted, adding that the terrace needed only be wide enough for a couple of chairs and an awning. ‘I want to be able to sit out there and look down on my brother across the street,’ he said.

Once J. J. moved into the building (known as the Sardi Building in honor of the ground-floor restaurant it houses), the split between the brothers had a physical manifestation. For the rest of their lives, they worked across the street from each other, employing a go-between, usually John, to carry messages back and forth. Rarely, if ever, did either man venture into the other’s domain.

‘J. J.’s apartment was garish beyond words,’ playwright Ruth Goetz recalled. ‘It was designed on a grand scale, and was elegant, I suppose, according to the taste of the time.’ Garson Kanin said that ‘Mr. J. J. had a charming apartment with lovely rooms.’ Whether the décor was ‘garish’ or ‘charming’ was, of course, in the eye of the beholder; what the penthouse signified unmistakably, however, was that its owner was a man of consequence. Heavy and ornate, the style was distinctly baronial, with Louis XIV furniture, a wrought-iron door from a Venetian palace, Syrian furniture inlaid with nacre and ivory, and a fountain.” 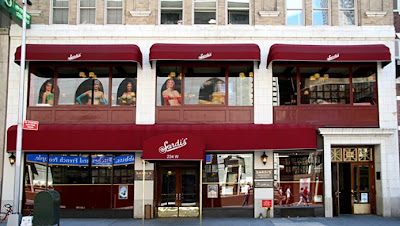 I admit that my focus during the meeting was on our conversation with Amy. She always asks all the right questions as she seeks to understand the current artistic and managerial conditions of our theatre. So I never noticed any fountains, French antiques or Syrian inlays, although they may well have been right before my eyes.

But as you’re leaving J. J.’s magnificent living room, you can’t help but notice the wrought-iron door from the Venetian palace. It sits directly beside the real door that is used today. Not only is the iron door huge—it looks like it weighs several tons—but it is also an artistic masterpiece, featuring a delicately crafted bas relief.

Today, The Shubert Foundation is just as influential in the nonprofit world of regional theatres as The Shubert Organization was and is in the for-profit world of Broadway. Long may both institutions continue to work their magic.